Are you looking to add the perfect calm guy to your home, and be a rescue hero?

Oden would be perfect for a trucker, or farmer. He LOVES men.

Oden is a very well-mannered boy and has been the best riding companion. My daughter and I take him on rides and it’s literally his favorite thing to do. He never ever meets a stranger. He loves kids and pretty much everyone. His eyes especially light up for men and I really truly believe he would literally be a man’s best friend to a guy. Our friend came over in a big truck the other day and literally jumped in the truck, right into his lap like, “Hey, man, want to be friends and ride? Lol.

A few things we have discovered about Oden:
1. He pretty much gets along with all of our other dogs except my more dominant two. Our younger shepherd and my Buddha butt are pretty dog selective, and they aren’t huge Oden fans. This makes him not so much a fan and then becomes a battle of the wills. Lol. However, he has not ever initiated anything and will mind his business until they stick their nosey butts literally up his butt.
2. Little creatures are a definite no. Cats. Bunnies. Guinea pigs. Hedgehogs. Anything little. He busted into one of our hedgehog cages today and tried to make a snack of her. However, she got the “haha” moment bc he walked away totally defeated with quills in his face. Don’t worry he’s fine. She’s fine. It’s all good but definitely no little critters. He sees them as jerky.
3. Leash manners are almost perfect now. He very rarely pulls and poops and pees almost on cue.

4. He’s not a big fan of toys. More so tendons and pig ears. He’s not a chewer but loves those treats. So, no need to invest in a toy bin. He won’t use it. He prefers just hanging out with his humans.

This guy so deserves a perfect home. He wants to just be your companion and I so hope he finds that perfect someone soon! He’s literally as low maintenance as it gets! 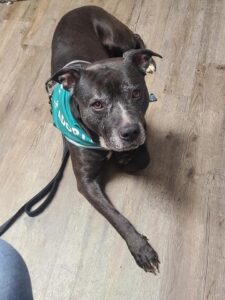